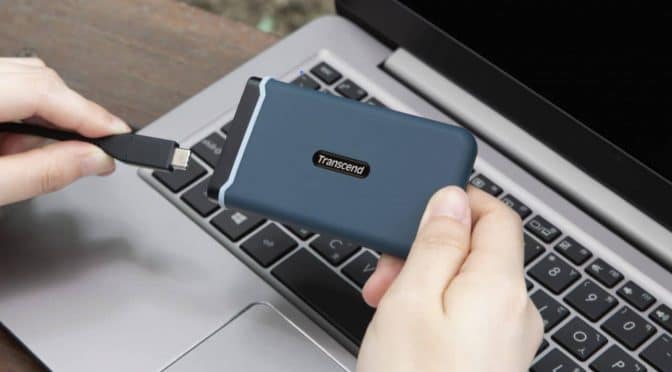 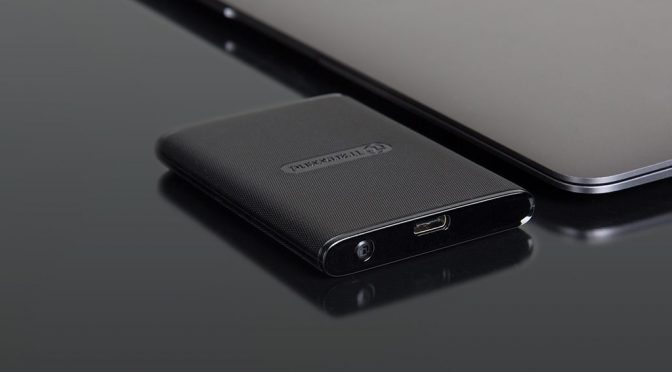 It’s nearly six months since we embarked on our EPIC Gadget Road Trip from Ness Point to Ardnamurchan and Back!! During our trip we called on all kinds of tech to assist us with the Gigabytes of data we were generating, mostly in the form of video and photos.

Most notable and indeed most important was removable backup storage and in this area we were able to call upon our friends at Transcend. Not only were they able to provide us with previously reviewed dash-cam hardware, but also with the amazing ESD220C Portable SSD drive.

The ESD220C is indeed portable in every way. It is both small and light, in fact small enough to fit into a wallet. This size and weight is due to the Solid State storage, which means that rather than storing your data onto a physical, spinning hard-disk, you are in fact using memory chips (TLC NAND flash) to store the information and thus weight and size stop being an issue. It will easily fit in your pocket and the case had a scratch resistant coating to keep it looking pristine.

The drive uses SuperSpeed USB 3.1 Gen 1 interface and built-in SLC caching technology to give read/write speeds of up to 410MB/s and 400MB/s respectively. It also supports UASP (USB Attached SCSI Protocol to further boost file transfers on supported computers.  The drive’s lifespan is also extended by the addition of RAID and LDPC and your data is safe with ECC encryption.

Also included is a USB3.1 Type A (for your computer) to USB Type C connector (for the drive). By Transcend using a Type C connector, it enables the drive to be connected to a mobile device (using an additional adapter) and allows for direct file transfers from Android OTG (On the Go) enabled phones and tablets. As you can imagine, this was a real winner in the depths of Scotland as we were able to pull photos and videos straight off our mobile devices in transit as the drive is powered from the same cable.

Using the ESD220C, I was able to transfer files from Paul’s Samsung Galaxy S7, my Samsung Galaxy S6 Edge, a Sony Xperia XZ1, my nVideo Shield K1 tablet and the Dell Rugged Laptop we also took with us. Of course I also transferred video from the DJI Mavic Pro‘s MicroSD card.

So, you can see that the tiny little device was indeed the seamless hub for secure storage for the entire journey. We also transferred the data from the Transcend drive at night to a second 1TB drive which enabled us to free up space for use during the day.

I should finally mention that the device also has a ‘one touch backup’ button for use with Windows PC’s running Transcend’s included software.

Of the many gadgets that I review and then have to send back, this will be one of the those that I will miss the most for it’s speed and sheer usefulness.

The drives are available in 120Gb, 240Gb and 480Gb storage options with prices around £66, £95 and £165 respectively. I tested the 240Gb model, which I think is excellent value for an portable SSD device. 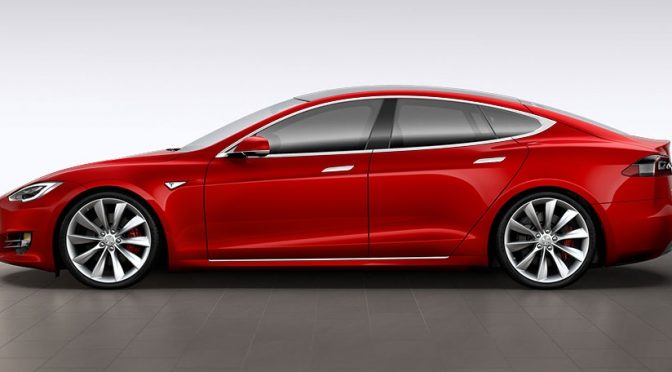 A ‘Gadget Man’ Road Trip would be nothing with a car stacked full of technology, here’s a quick summary of the gear we are rocking for the trip.

This is of course an ‘Electric Challenge’, so we are driving a Tesla Model S 100D. A 4 wheel drive, twin motor electric car, packing a 100 kWh Lithium-ion battery with a projected range between charges of more that 300 miles. We can also take advantage of Tesla’s very own Supercharger network, meaning our charge times will hopefully be under 30 minutes. Enough time for a coffee and meal on our long journey. The car is packed with driver assistance technology and always on 4G connection for maps and music streaming.

We will be taking along a DJI Mavic Pro for aerial shots. The Mavic is an outstanding, foldable 4K drone with a 25 minute flight time. It boasts the most advance stabilisation technology available today, combining GPS, Glonass and Optical stabilisation and obstacle avoidance.

As a backup, we will be taking along a DJI Phantom 3 Standard with 2 batteries.

Our filming will be carried out on a DJI Osmo+ 3 axis stabilised camera with 3.5x optical zoom and 4K video recording. This will be backed up by a GoPro Hero camera, Panasonic Lumia G3 and Samsung Galaxy S6 Edge smart phone.

Our editing will be carried out on a Dell Latitude Rugged with Core i7 and SSD drive, this will be complimented by a Transcend SSD drive and SPS Rugged USB3 1GB Hard drive.

We are looking forward to confirmation that EE will be providing us with 30gb of data and a in car wifi hotspot, to allow us to Live Stream, and Vlog during the journey.

Our trip tracking is being provided by Coderus. Custom built apps on our mobiles will transmit our GPS coordinates to our server in London, this information will be pushed to www.eastwestroadtrip.co.uk and www.thegadgetman.org.uk to allow for our friends, families and supporters to view our progress in real time. This is looking to be a fabulous addition to the trip and will encourage interaction with Paul whilst I concentrate on driving. 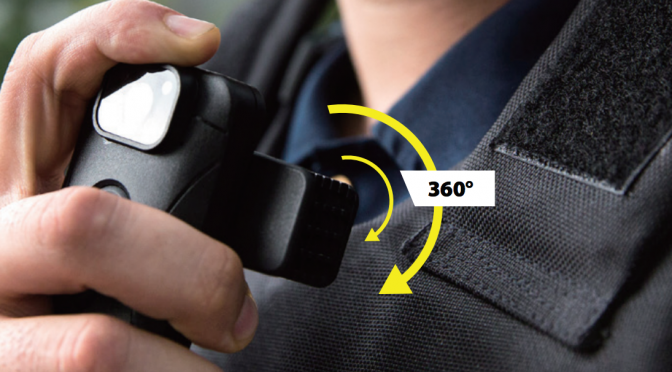 This week I talk about a new wave of devices aimed at both Police and private security firms. Body Cams allow for the collection of video evidence which is aimed at reducing the time wasted by conflicting opinions from police and witnesses to crimes.

I have been reviewing the Transcend DrivePro Body 10, a really excellent example of such a device, which is easy to set up, extremely simple to wear and operate and produces excellent 1080p video in both daylight and nighttime. The device has an excellent F2.8 160 degree wide angle lens and comes with a 32GB micro SD card included.

Video is split in to manageable sized files which means that en entire video file does not need to be viewed or copied to other media for use in court. It is also time and date stamped with the option of adding additional text to the file which is displayed on the resulting video.

The device is weatherproof and also includes a ‘snap shot’ button for taking 3.3mp image files. Operation of the video is simple and only requires the power button to be depressed to start recording and pressed again to stop.

Don’t forget to listen in to the stream to find out more about the Transcend DrivePro Body 10.

Many thanks to Transcend for providing me with a demo unit. 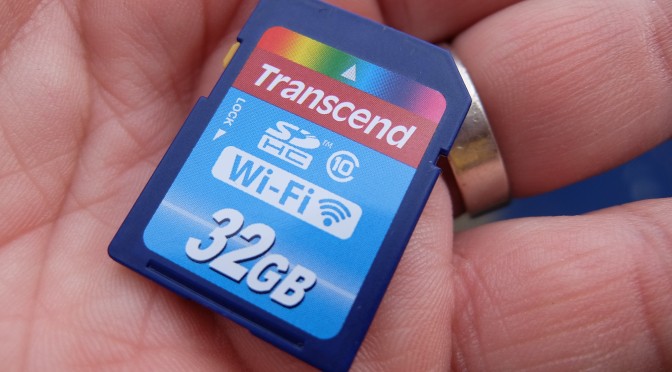 People who know me will know that it isn’t easy to render me speechless, but after trying out my gadget this week, I can honestly say I was! I’m talking about the Transcend WiFi SD Card, a very impressive exercise in both miniaturisation and usefulness.

Most of us will be aware of SD Cards, we use them everyday in our cameras and they are an established way of transferring photos and videos from these devices to our computers, which is kind of where the main problem lies. SD Cards can be very fiddly, more so if you are an active photographer. There is definitely going to be an occasion when you drop or worse still lose your card during handling.

It seems as though Transcend have come up with a very elegant solution to this problem by embedding WiFi technology into the card itself! This is an astounding feat of engineering and works very nicely. Users are able to browse their photos using either an iPhone or Android handset via a downloadable app or if using a computer can connect directly to the card and download the photos using a web browser.

The only stipulation is that your digital camera is supported (click here to view the list) and that the camera is kept powered up during the process.

During the recording of this weeks episode I took a photo of presenter Mark Murphy live on air using the card and shared it on Facebook.

At around £35, the card is in my mind a bargain and I would heartedly recommend it to budding photographers who want to share their memories both quickly and smoothly.

Thank you very much again to Mickaela Noone from Transcend for her assistance. 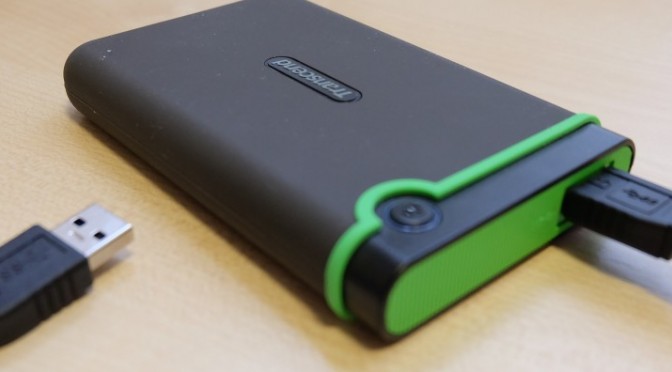 This week we talk about the Transcend Storejet 25M3 detachable

USB 3.0 hard disk drive. These are ruggedised, which mean that they are a bit more durable than your average portable hard disks and whats more, thet support USB3.0 transfer speeds!

The are whisper quiet to use and work very nicely as a backup device with the addition of a quick backup button and also can encrypt your data, so if you do unfortunately lose the device prying eyes won’t be able to get their hands on your data.

We also tested this device as a Set-top box disk drive, this added the functionalities of pausing and rewinding TV and also recording episodes of programmes. Again it worked flawlessly and more importantly quietly.

To find out more, listen to the stream and find out what I thought of the device.

Thanks to Mickaela at Transcend for her assistance again!!

You can find out more information about Transcend and its other products by liking their Facebook page or following them on Twitter.