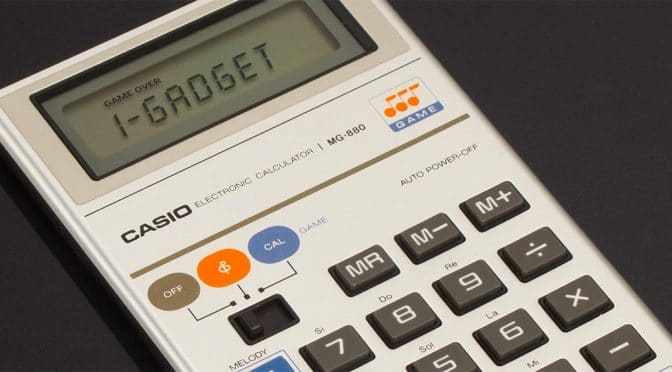 This week begins a 10 week series of Retro Gadgets. Technology which has featured in my life and evokes childhood memories.

Listen in on the audio recording above. I have included a surprise at the end which wasn’t recorded at the time.

If you grew up in the  ’70s or ’80s, you may have experienced some of these gadgets. You might be still using them or maybe they are gathering dust in a drawer.

The first of these is an absolutely awesome gadget. A gadget which opened up the national curriculum to the use of calculators. It also introduced us to mobile gaming.  Leading thousands of young people to huddle around each other in the schoolyards of the early 1980s.

Released in the summer of 1980, the Casio MG-880 was ostensibly a calculator aimed at young people. The 1980s saw a revolution in the teaching techniques applied to mathematics in schools. Initially seen as a way of ‘cheating’. Soon, however, it was accepted as a legitimate means to ‘check’ calculations, whilst continuing to show workings-out’ in answers.

Casio had something up their sleeve though. Their customers not only received a calculator, but they also received a musical instrument and game. This was genius marketing, Casio tapped into the school market and rewarded the kids at the same time.

The calculator functionality allowed for addition, subtraction, multiplication and addition. In addition to this, results could be written to memory, recalled and directly subtracted or added to further calculations. Percentage calculations were also included.

It was a beautifully designed device which hasn’t aged at all.

MG-880 provided musical entertainment by either a preprogrammed ‘Oh When the Saints’ or by users composing their own music. Musical keys illustrated by the relevant Solfège above the enabled buttons allowed for simple compositions.

IYou can hear this being played at the end of the attached podcast.

It was no secret that switching the calculator to ‘music’ mode in a lesson would result in its swift confiscation.

The ace in the pack was in the inclusion of the Game. This took the form of a button mashing invaders themed game utilising the simplest of graphics, the number display itself.

The invaders game required the using decimal-point to cycle through 0-9 and n which denoted the mothership. Digits slowly advance across the screen from right to left. The player matches the number and presses ‘fire’ to remove it. Each level became faster and more difficult. Lives are lost when invaders reach the base.

The game was an instant hit across the planet, from my school in Hitchin, England to schools in New Zealand, every child wanted to own one and more-so, they wanted to excel at the game. Millions of the devices must have been sold with a substantial amount of them confiscated by over-enthusiastic teaching staff!

As with all fads, the MG-880 fell out of favour to be replaced by more advanced handheld games and creating a new boom in entertainment. Perhaps thousands of them still exist in boxes on the shelves of staff-rooms around the world.

This was the beginning of Casio’s boom. Relentlessly creative, they produced some the most ingenious of technology of the 80s. From calculators to watches with built-in calculators and melodies, they were the kings within their marketplace.

Don’t forget to listen to the audio using the link above. It was recorded at BBC Radio Suffolk & broadcast on the 11 May 2019. Listen to the VERY END! I have included something geeky and special.

Thanks to Matt Marvel at BBC Radio Suffolk for inviting onto his show. Keep tuning in for the next 10 weeks for more gems!