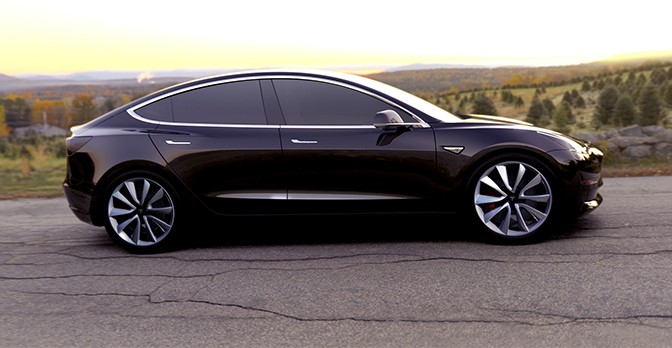 Last night (or very early this morning if you live in the UK), Elon Musk CEO of Tesla Motors finally revealed the much anticipated 3rd part of his electric vehicle master plan, the Tesla Model 3.

As an established player in the EV market, Tesla were looking for a vehicle with ‘mass market appeal’. In order to do this successfully they needed sell a vehicle with was considered ‘affordable’ to the masses, this doesn’t necessarily mean everyone should be able to purchase one, but affordable in the it’s target market, which in the Model 3’s case would be Audi A3 saloon or BMW 3 series.

Elon Musk has consistently quoted that the Model 3 will be priced at $35,000 which is around £25,000 and he is not budging on this price in the USA anyway. In the UK, I would suggest £30,000 is going to be the starting price minus any remaining UK Government plugin grant that might exist by the time it launches in the UK late 2017 / early 2018.

There is undoubtably going to be several models in the Model 3 range such as the P and D derivatives of the Model S and Model X, the standard entry level model is looking to have a projected range of 210 miles per charge, and accelerate to 60mph in under 6 seconds. It will be available in rear wheel and four wheel drive. Owing to it’s shorter wheel base, I would expect the battery size to be smaller than the current 90 kWh of the current top end P90D of the Model S and Model X, perhaps more likely to be 65 – 70 kWh, but this is simply guessing. However with this in mind, I would expect a Model 3 65, Model 3 P65 and Model S P65D but upon release the battery technology is going to be 2 years ahead of what we have now, so we might be in for a surprise however based on the projected ranges, I would go for a 65 kWh or smaller battery, with much less powerful powertrains than the existing models.

The Model 3 is all about mass market and to achieve this the car needs to be built in a mass market car plant which Tesla already owns in Freemont, California which was used in the past to manufacture GM / Toyota cars but now is refitted to build the Model S, Model X and now the Model 3. Again I would summise that the assembly plant in Tilburg, Netherlands will look after the European assembly of the Model 3 using parts shipped from the USA. Tesla has made an awful lot of noise about the Gigafactory in Sparks, Nevada which when fully up to speed will be able to manufacture more lithium ion batteries annually than were manufactured worldwide in 2013. This manufacture by economies of scale is projected to drive down the cost of the batteries needed to power Tesla’s vehicles and consequently bring down the price of the vehicles coming off the production line as well as the Tesla Powerwall home batteries. 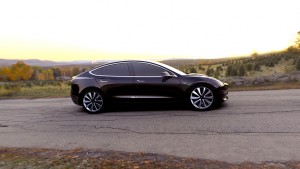 The Model 3 can according to Elon Musk, seat 5 adults comfortably, even on a smaller vehicle footprint. Tesla does this by moving the driving position forward into the space that would contain an engine if this was a traditional petrol or diesel car. It retains the centre console screen that graces the Model S and Model X, but is now a 15 inch landscape arrangement rather than the giant 17 inch portrait version. Inside the car, it retains the quality of the other Tesla models, but is significantly more sparse, perhaps similar to the BMW i3 which sacrifices refinement for space. As before, the car includes trunk and frunk (frunk trunk), for British readers, the bonnet area can be used for luggage as can the boot space.

Outside of the vehicle, the design has been refined again completely removing the ‘grill’ of the Model S and taking the smoother front lines of the Model X to produce a completely seamless nose cone. The general design of the car echoes the Model S, but downsizing it in a similar fashion that the BMW 3 series downsizes to the 2 series. The front and rear lighting remains the same as the Model S and X, and the wheels appear to be available in a number of choices as the other current models.

The Model 3 will support Tesla’s Super Charger network from the outset meaning that fast charging on long journeys will be easily achievable.

The Model 3 is still a year away from final production, but that hasn’t stopped the flood of orders which mean’t that in less than 24 hours more that 232,000 pre-orders (and associated $1000 deposits) have been made with some people queuing around the block from their local Tesla Stores to get their order in first.

Check out the images from last night and launch video, all courtesy of Tesla Motors Inc.