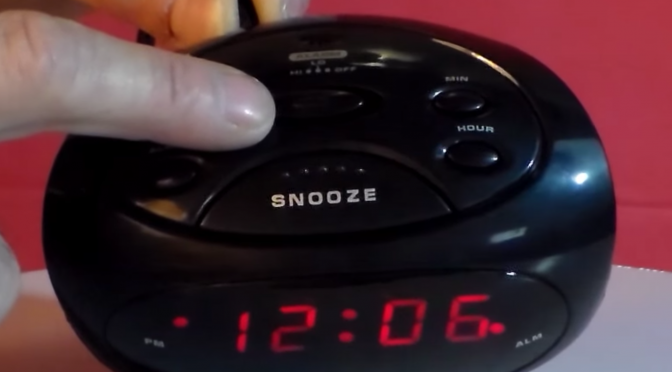 I sit here after reading debate after debate on the need for BST or British Summer Time and it has brought back some fond memories with my own personal battle with time keeping aged 17 – 22 years.

In 2016 there is no reason to EVER be late for anything. We have electronic gadgets to remind us by phone, text, email, popup reminders and our wrists now buzz with the wide variety of wearables. Simplicity is supposed to be the key, we can now set alarms then pause (or snooze) or even postpone them completely. Of course everything is now synchronised on all manner of electronic equipment connected by WiFi, 4g, 3g and bluetooth, it now seems we don’t have any excuse to be late anymore, we can even ask our gadgets to do things without actually physically interacting with them. With the advent of a new generation of ‘smart speakers’ such as Amazon Echo and Google home we won’t even need to remember when it’s time to go to work because these devices will already know. It truly is the dawn of artificial intelligence and machine learning. We are now standing on the precipice of self aware technology.

Now… let us take a step back 30 years to 1986 where things were oh so different.

Smartphones? What the hell are they?. Bluetooth was a long lost King of Denmark and email was something people at Berkeley University used to send to each other between classrooms. Calendars hung on walls, normally fixed on one particular month if you happened to own the 1986 Sam Fox Official Calendar.

The master of timekeeping was sitting next to your bed, a wonder of technology who’s sole purpose was to ease your from sleep to awake in an instant, an efficient mechanism which could wake your either brutally with a ear piercing beeping noise or with the assistance of DJ Mike ‘Smithy’ Smith (Rest in Peace) gently coaxing you from your golden slumber, easing you into realities of Monday mornings.

What ‘Gadget’ do you speak of? What mastery of 80’s technology could this be?

Of course this invention was the ‘Digital Clock Radio’.

Mine was your ‘bog standard’ affair, equipped with Radio or ‘Beep’ alarm with the addition of snooze. An amazing invention to be ignored, paused and sworn at for many years until 1993 when lack of sleep and long hours of work forced be to put my fist through it early one Sunday morning!

There was however a big problem with my digital clock radio, a VERY big problem.

The device only only allowed one alarm to be set at any one time of the day. This would work fine if every morning you had to rise at 6:50am. During the weekend you would switch the alarm button to OFF, allowing you a short lay-in on a Saturday or Sunday morning (what are they???) and making sure the switch was placed in AUTO on Sunday evening to avoid that ‘Where the HELL are you? call at 10.50am from your boss the next day!

However, my work hours weren’t regular back then. Sometimes a project needed completing early and the alarm  would need to set a couple of hours earlier for the next day. The radio didn’t allow for setting the alarm back a hour, it required repeatedly clicking one button whilst holding the other in order to advance the alarm 22 hours to set it from 7am to 5am, the buttons were never that comfortable or ‘ergonomic’ thus 22 hours of clicking would mean a cricked thumb and sore fingertips. Setting the alarm forward two hours was obviously much less painful. Things got more frustrating when you ‘missed’ an hour whilst cycling past it in haste,  causing yet more endless clicking until the desired hour was found (lets not even get on to minutes!).

it was while advancing the alarm through this 22 hour period that it suddenly hit me like a bolt of lightening!! A solution found my accident, by the slip of a thumb, an accidental advance of time rather than alarm! There was no need to go through this tedious task at all! Setting the alarm back 2 hours was easily achieved by simply advancing the main clock forward 2 hours and leaving the alarm where it was, 8pm became 10pm, then the alarm would be shifted forward an hour, the ‘real’ time remaining still, time adjustment was always achieved by setting alarm or time forward, there was not tediously clicking needed anymore.

Thus on that fateful day in 1986, MMT was born, but this wasn’t the internationally recognised Myanmar Mean Time, no this was my personal time zone named Matthew Mean Time, a constantly moving time zone designed to allow me to get into work on time without sore fingertips!

The nonsensical mess of time displayed on my Digital Clock Radio that mean’t so much to me, the protector of timekeeping, the barrier from verbal and written warnings for repeated lateness at work mean’t absolutely nothing to visitors who remained confused and befuddled by the meaningless number displayed on my bedside clock. Some would bring the ‘error’ to my attention even offering to correct it for me. On one occasion a friend adjusted the time to GMT for me whilst I was out of the room and thus cause the alarm to sound at 2.30am the next day! But still MMT continued until 1991 when it travelled with me to live in Harrow but was deemed unacceptable by my partner and it’s use immediately ceased.

Whilst I sit here writing this article, the day after the clocks have ‘gone back’, the end of British Summer Time 2016, with the inevitable drag of darker, colder evenings, I lament at the demise of MMT and it’s five year reign in my life, along with the repeated “What the HELL is wrong with your clock Matt?” and it’s proud reply…

Happily the need for such amateurish horology related hokum is unnecessary in todays world. Altering your alarm time is now as simple as uttering the words ‘OK Google’ and crossing your fingers.