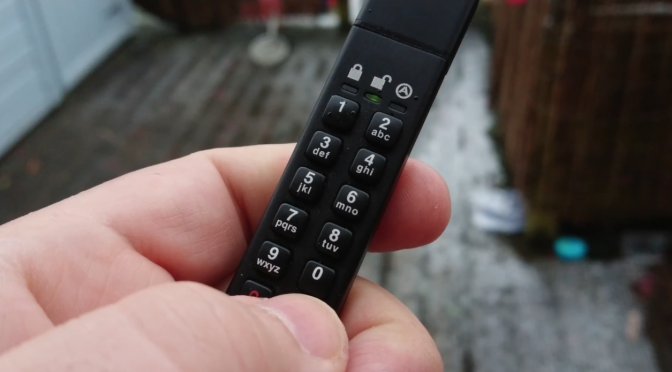 If you watch Mission Impossible: Rogue Nation, you will find a scene near the end of the movie where Faust (Rebecca Ferguson) hands a USB drive to her ‘handler’ Atlee (Simon McBurney), he then proceeds to surreptitiously erase the contents of the USB stick using an combination of distraction, slight of hand, a Nokia 930 smartphone and a copy of the Financial Times. Thus Faust is oblivious to the smoke and mirrors that has just taken place and continues on with her mission (should she choose to accept it!).

All of the above just seemed completely unnecessary and it was with this still in mind that I began testing and reviewing the Apricorn Aegis Secure Key 3z, a storage device which not only hardware encrypts your data but also includes a self destruct option for those most inconvenient moments when your only option is to completely destroy the data!

The majority of disk encryption is at software level which means that you can access the information, but it is in effect ‘scrambled’ using a password or code. Try enough times using either brute force or dictionary attempts and you may just crack the key and thus give yourself access to the information. 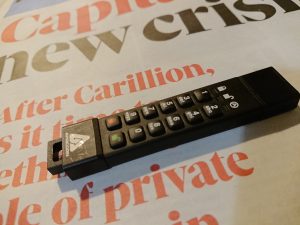 Out of the box, the Secure Key measures in at 81mm x 18.4mm x 9.5mm and weight 22 grams and has an internal rechargeable battery. Once unpacked, you will need to set up your Admin pin number straightaway as there is no pre-programmed key. This must be between 7 and 16 digits, you cannot set consecutive numbers or numbers which are all the same, this pin is users to set up the Secure Key allows to to manage other features, but more of that later.

As soon a you’ve added your admin user, you can then (if you like) add a standard user. You would use this feature if you were going to manage the Secure Key and were going to issue it to another person to use. Again, this is a fairly straightforward and covered in the ‘quick start guide’.

Whilst locked, the USB is effectively useless, plug it into a computer’s USB port and you will find the computer won’t even recognise the device as it is hardware disabled, in other words it’s switched off. This is indicated by a ‘red’ led illuminating on the device. To unlock the device, you press the green padlock key and then enter either the user or admin pin number and press the green padlock again. The red LED will switch off and the green LED starts flashing, this indicates that device is unlocked and ready for use, it is simply a matter of plugging it in to a spare USB port.

OK, so the key performs really nicely and had government grade encryption, what happens if I lose the key and it gets into the hands of an enemy?

First off, the key is encased in a IP58 Dust and Water Resistant tough metal shell with polymer coated wear resistant keys. Inside the electronic components are protected by a filling of hard epoxy resin, making a physical attempt to access the electronics virtually impossible without causing catastrophic damage.

PIN entry ‘brute force’ protection means that if you enter the code number incorrectly more than 3 times, the space between entry of subsequent pins slows down, if the incorrect entry of keys hits 10, the red light on the key will start flashing rapidly, at this point you have 10 more attempts left, if you fail to enter a correct pin within these last attempts, the key will consider itself as under attack and will delete it’s data as a precaution. 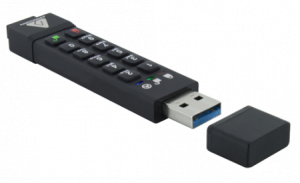 Should you be left in the position of Faust and Atlee in Mission Impossible : Rogue Nation, there is in fact a better option for destroying the data on the card (or in fact having a third party do it for you). Yes, the Secure Key supports the entry of a ‘self destruct key‘, a key which is designed to delete all data on the key and reformat the device, this key is then assumed as the standard key for the device and it will behave as a brand new drive.

It was quite fiddly to set up, but I was successful in testing the ‘Self Destruct’ mode, it worked as documented and didn’t give me any indication that it was taking place.

Apricorn have made a very solid product with the Secure Key 3z, it looks and feels the part, it worked very well and the security features were exceptional.

I loved the fact that a company is working SO hard to make the theft of data so difficult. In times of cross border data theft, the counter-measures employed by the Secure Key 3z are both impressive and comforting.

Starting at £74 for the 8GB to £228 for 128GB models, the USB Storage Key is reassuringly priced for the corporate market.