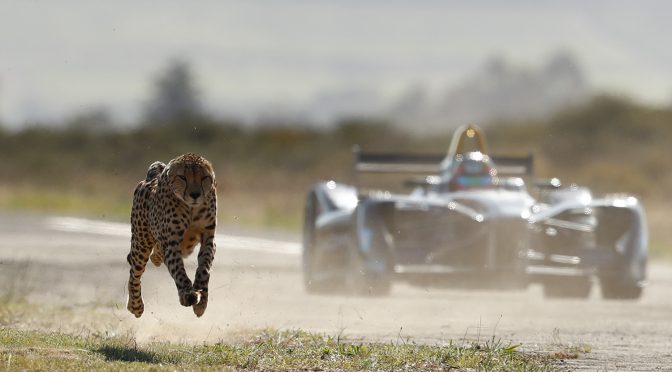 Watch as a fully-electric Formula E car lined up against a cheetah in the Western Cape, South Africa.

The race was undertaken to highlight the global impact the burning fossil fuels has on the environment and consequently threatens these endangered species.

Both cheetah and Formula E car reach speeds of 60mph in around three seconds. To find out which came out on top, watch the video.

As a Zero-Emissions motorsport, Formula E aims to help provide a solution by being a catalyst for change and help accelerate the uptake of electric vehicles and making a cleaner environment for all of us.

Jean-Eric Vergne, Montreal E-Prix race winner and TECHEETAH driver, said: “Both the TECHEETAH Formula-E Team and I want to be part of raising awareness for the wider impact that climate change has on our planet. We do it mostly by showcasing and developing our electric cars across the world throughout the Formula E season, but we wanted to do more outside of the race track. There are only around 7,000 cheetahs still living in the wild and we have a strong desire to raise awareness for the main threats they face, such as illegal trade of cubs for pets, loss of prey due to habitat loss and fragmentation aggravated by climate change. I’m really proud to have participated in this film and stay tuned for some exciting news to come following the documentary.”

There are now just 7,000 cheetahs remaining in the wild. The species is wide-ranging and sparsely distributed and needs large landscapes to survive, making it particularly vulnerable to habitat loss and fragmentation – threats that are exacerbated by a changing climate.

The film was overseen by conservation experts and animal welfare organisations, and is released in partnership with Animal Issues Matter, Cheetah Outreach and Endangered Wildlife Trust.