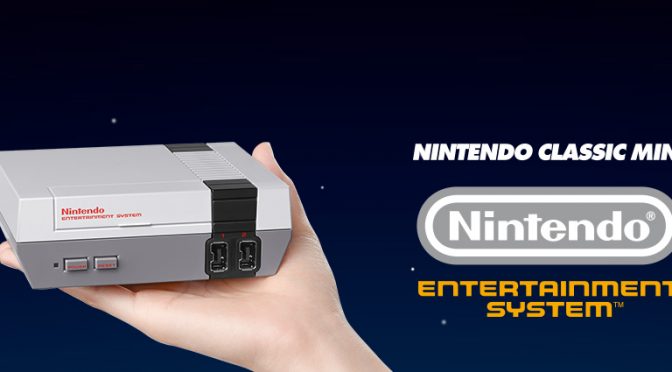 This week has been all ‘GO’ with Nintendo, but some surprising and particularly pleasing news came along today with the announcement of the.. Nintendo Classic Mini: Nintendo Entertainment System !

Yes, we get to relive those halcyon days of playing Super Mario 3 into the wee small hours of the night and best of all we now get to play on a HD TV.

Nintendo have indeed announced the release of a mini version of the famous Nintendo Entertainment System or ‘NES’, coming to a store near you from the 11th November 2016.

The console is a cut down to size replica of the original million selling home games console. This time we plug it into our high def TV’s with the included HDMI cable and power it using a mini USB power cable (We supply the plug, possible from the dozens we have accumulated over the years from mobile phones and tablets). 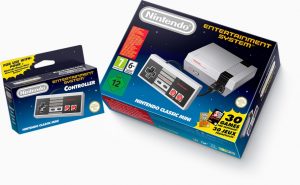 This time around there is now fiddling with games cartridges, instead Nintendo are loading the console with 30 NES classics, from the legendary Super Mario Bros 1, 2 and 3!! to The Legend of Zelda, Metroid, Donkey Kong, PAC-MAN, Kirby,

Relive the 80s when the Nintendo Classic Mini: Nintendo Entertainment System launches in stores on 11th November. The classic NES is back in a familiar-yet-new form as a mini replica of Nintendo’s original home console. Plugging directly into a high-definition TV using the included HDMI cable, the console comes complete with 30 NES games built-in, including beloved classics like Super Mario Bros., The Legend of Zelda, Metroid, Donkey Kong, PAC-MAN and Kirby’s Adventure and more (I’ve put the complete games list at the end of the article).

When my eldest son was a baby (He’s now 24!), I use to sit rocking him in the night when he woke for his feed, while he was getting off to sleep I spent many an hour playing Super Mario Bros 3 on a original NES that was lent to us by my old mate Mikey Moore. This was a time of classic console gaming, memory and processing power was in short supply so the programmers worked near miracles to produce these simply amazing 8 bit games.

In reality Nintendo owned home consoles for a decade before the onslaught of Sony and Microsoft and their enormous bank balances and getting to play these games again is going to prove very popular for gamers young and old.

The console comes with HDMI cable, USB cable,one Nintendo Classic Mini: NES Controller and of course the 30 including classic games. Nintendo will also sell you additional controllers to make your doubles games even more memorable.

The console is released on the 11th November 2016, look pay around £70 for the console package.