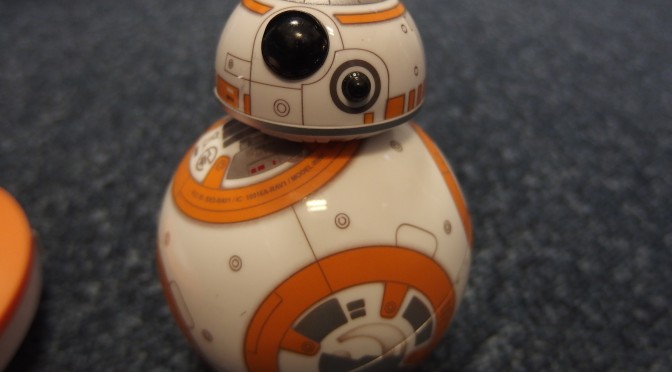 It’s been 10 years since the last Star Wars movie was released and it looked like we wouldn’t been seeing anymore of the George Lucas universe. That was until 2012  when Lucasfilm was snapped up by Disney for $4 billion!

With this announcement came the news that the Star Wars movie franchise was to start again with the release of Episode VII The Force Awakens, followed by Episode VIII and IV plus other Star Wars movies not part of the main series. It’s certainly all go! As with the previous movies the mega marketing machine around Star Wars kicked swiftly into gear and earlier in the year Star Wars Day heralded the official reveal of a slew of toys, games, apps, games and much more.

The most enduring characters of the Star Wars series have most certainly been the droids R2D2 and C3PO, both featuring in all the films in the current series and set to continue to appear in the future too. Along with these fan favourites a new droid is set to take a starring role in The Force Awakens, his (we think it is a he) name is BB8.

BB8 shares certain similarities with R2D2 in the style the dome that carries the eye, however rather than the dustbin style body with legs, BB8’s body is made up of a large ball with the head magically floating onto as the ball rotates to move the droid around.

Disney have licenced the job of producing a ‘toy’ version of BB8 to the tech wizards at Sphero, who have in the past produced a number of robots based on balls that can be controlled by phone apps. BB8 retains this style of control, requiring the user to control the droid using a iPhone or Android device connected via a special app and Bluetooth. BB8 is charged by sitting the ball in a little cradle and whilst charging the dome head will move around is if taking in the surroundings.

Once charged, you place BB8 on the floor and run up the special app, the droid jumps into life with all the sound playing through the smart phone. You can choose to pilot the droid using controls on the app, control it via ‘set piece’ moves, set it on patrol around your space where it with detect obstacles and attempt to avoid them whilst chirping away in the same style as R2D2. You can also control BB8 via voice by training the app to recognise different commands.

Finally you there is a entertaining ‘Hologram’ mode. This allows you to record a short video message on your phone and then have BB8 project it like a hologram. In reality this is done  by pointing your phone camera at BB8 and having the hologram overlaid onto the image on the screen. It is quite cool though,

The Sphero BB8 is  not really a toy aimed at young children and at around £120, it’s fairly pricey to and might have limited interest after the hysteria of the movie dies down.  Expect more from BB8 in the upcoming movies and a revised ‘battle damaged BB8’ in 2016

After 17 years of subtle design changes, Google has today revealed the next step in its evolution, it has completely revised its logo.

Gone is the Serif based logo of old, replaced by a new San Serif style Google replaced by the more modern identity which seamlessly transitions across multiple platforms.

Expect to see the Google pages across all platforms from mobile phone, TV, watch, desktop and even Car!

Personally, I like the typeface and it brings this part of Google branding in line with it’s ‘Flat’ design elsewhere